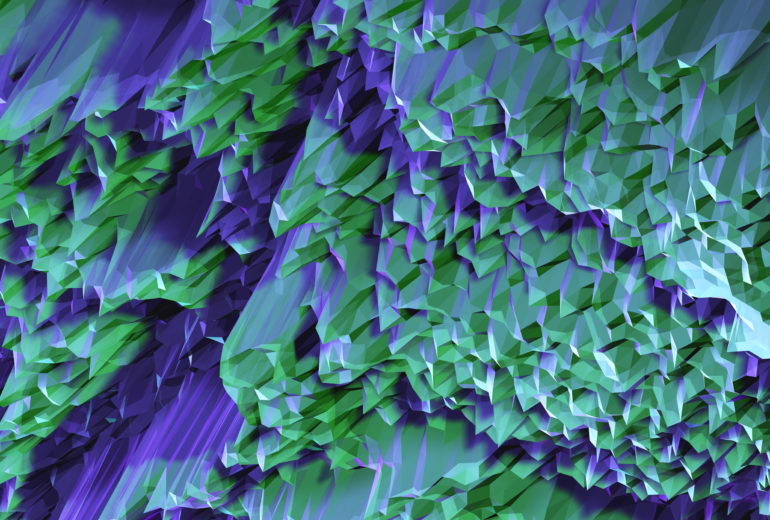 Abstract:
The research that originated Nanocriogênio: Três is located between art and science within the ambit of nanoart and nanotechnology, in an attempt to update properties related to the nano scale in art, allowing the viewer a new experience. It explores the hybrid, transdisciplinary universe of that science taking place in the real and virtual environments, by means of 3D animated videos, four copper plates, dies of my first solo exhibition of prints, and a circular ice mould used in the industrial freezing process.
The images seen in the animations are originated from sweepings made by an electronic sweep microscope of samples of my fingernail and hair, which represent my body as a whole and are re-processed in digital programs. The nano and real scales are mixed in the work because those samples appear in video on ice on the original scale, already prepared for being scanned by the microscope.
The four copper plates are activated by touch sensors and make the viewer, when he/she keeps pressing them, hear recorded dreams which I selected from my diary when I was under Jungian analysis, since they are at the level of Jung’s collective unconscious, thus being easier to understand. The lower sound demands that the viewer comes closer and pays more attention. The interactive process is not limited to a funny game, but has to do with the experimentation of subjects related to quantum physics such as the preponderance of the touch and haptic senses on the visual.
A metaphoric symbiosis is built between the scientific process of cryogenics, or post-mortem freezing, for a possible resurrection, and the nanoart world inserted into quantum physics with properties that we still consider magic due to the conditions in that environment: energy in the limits of matter, with a perception in the domains of senses seen as secondary in our culture. This is also because science still looks for words to describe what happens in that world, for the difficulty of understanding its properties and for the flaw of the usual semiotic meaning of the words to explain its concept.
That research gave origin to three installations with elements that present different organizations, which were shown at EmMeio#4.0, National Museum of the Republic, Brasília, 2012; Artech 2012, Algarve University, Portugal, awarded as the Best Installation; and this one presented now.

Vídeo about the ice
Fernando Codevilla

Biography:
Anna Barros
PhD in Communications and Semiotics, PUCSP and San Francisco Art Institute. She has been working with nanoart since 2007, exhibiting installations and 3D digital animations; first prize installation in Artech 2012, Portugal. She has been participating in several national and international conferences. Independent Curator of international shows; author with published articles and books; former president of the National Association for Researchers in Fine Arts. Nominated for the Sergio Motta Art and Technology Award, 2001, with the SDVila group and, in 2009, for her carrier.
Alberto Blumenschein
He studied arts at FAAP in the early 1980s and works with digital communications since 1989. In 1997 he created the GRupo SDVila with Anna Barros. He was a finalist at Prix Mobius (France, 2000) with the multimedia piece RIZOMA, with Kiko Goifman and Jurandir Muller; he was an invited artist of Banff Centre for the Arts in the field of interactive dramaturgy; nominated for the Art Technology Sérgio Motta Award, 2001, with the group SDVila; participated in the exhibition “Um Novo espaço para uma Nova Percepção: Nanoarte”, MuBE, 2010; in the Media Art Biennial in Chile, 2012; and in Artech 2012 in Faro, Portugal, where he and Anna Barros were granted with the Best Collective Installation award.