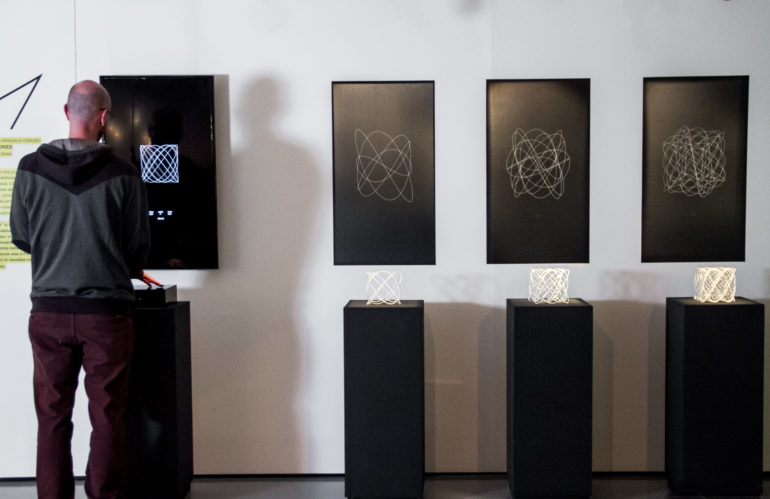 Abstract:
”The Harmonic Series” is a collection of mechanical devices, software, sculptures, and prints that explore musical harmony. Major, minor, e diminished chords are represented by Lissajous figures, inviting visitors to discover a relationship between musical and visual harmony.
In the nineteenth century French mathematician Jules Lissajous invented a device to visualize sound vibrations. Two tuning forks were placed orthogonally, each with a mirror attached to its tip. A beam of light was directed to the first mirror, reflected to the second one and finally to a screen. If the frequencies of the tuning forks were related by simple inter ratios – which make the harmonic musically – the figures would be visually harmonic as well.
“The Harmonic Series” re-creates and extends this experiment using current tools. By replacing Lissajous’ tuning forks with speakers, and candlelight with a laser pointer, a mechanical device allows visitors to sign into two microphones. As the speakers vibrate at the frequency of the voices, a representation of the interval between them is generated. Percussive and dissonant sound generate chaotic figures, while harmonic intervals generate harmonic images.
A custom-build application take this experiment into the third dimension. Visitors can interact with 3d Lissajous figures, chosen with which three frequencies to represent as they see and hear the result. They are also able to make their experience tangible by generating a 2d and 3d print. A series of prints and sculptures generated by the app represent major, minor and diminished chords. (www.theharmonicseries.net)

Biography:
Luisa Pereira is an artist and programmer based in New York City. Her work explores music through interactio turning visual and tangible interface into abstract musical concept. She is a research fellow at ITP, an art and technology program at New York City University’s Tisch School of the Arts. She holds a MPS from ITP, and a degree in System Engineering from Universidad ORT Uruguay. (www.luisaph.com)
Manuela Donoso is a designer and a technologist living in Brooklyn. Her interest lies in depicting sounds through light, in designing sound through images. She holds a MPS from NYU’s interactive telecommunications program, a MA degree in Light Design from University of Rome Sapienza and a design BA from Universidad Católica de Chile. She is currently working at Brooklyn Research and at Jim Hodges Studio. (www.manueladonoso.com)