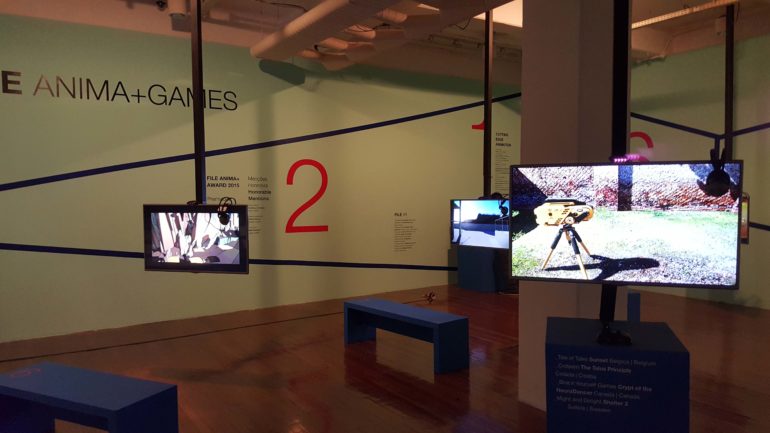 Oi Futuro presents the exhibit “FILE ANIMA+GAMES RIO 2015: The Van Goghs will go”, from November 03 to 29 at the Oi Futuro Flamengo. The program comprises completely immersive experiences through virtual reality devices, games for several gaming platforms, such as computers and tablets, and animations from many countries, prize winning artists from the FILE ANIMA+ AWARD and similar festivals.

The great novelty in this exhibit is the leisurely and artistic content through equipment that provide full immersion virtual reality. Experiences that relate directly to our physical perceptions, such as looking around, and which are capable of bringing us to wonderful environments; of provoking impressive sensations. In Mac Cauley’s “The Night Cafe”, for example, the visitor can explore the world of Van Gogh’s paintings, enjoy his iconic sunflowers in three dimensions, or walk around the chair he painted in his room. In Christin Marczinzik & Thi Binh Minh Nguyen’s “Swing”, the dream of flying comes true with a swing and a pair of 3D glasses. Still among the installations, in Felix Herbst’s “How Does That Move” the visitor can control virtual animals through his/her gesticulation in the physical world.

In the computer games department, the highlight is Sarepta Studio’s “Shadow Puppeteer”, which tells the story of a boy and his shadow, who, once separated, must learn to work together, manipulating light and darkness. Loveshack Entertainment’s “FRAMED” is a noir enigma game for tablet, in which the visitor has to reorganize a comic book’s panels in order to change its outcome.

The animation exhibit presents short­film works from innovative and experimental artists who use different techniques and approach various topics. It also presents the “Cutting Edge Animation” exhibit, with works from Aboveground Animation, an animation, video, and musical performances itinerant showcase with artists from all over the world. For the first time, FILE offers an animation award, the FILE ANIMA+ AWARD. With over 100 subscribed works, all using different techniques, 6 animations were selected as finalists, consisting of 1st, 2nd and 3nd places, plus honourable mentions. The exhibit also brings awarded animations from the most important festivals worldwide, Japan Media Arts Festival, Be There! Corfu Animation Festival, SICAF, SIGGRAPH, and ANIMA -­ Córdoba International Animation Festival.

This is FILE GAMES RIO’s fifth edition. An event organized by FILE – Electronic Language International Festival, the largest art and technology festival in Latin America. The complete program is available on the website file.org.br. Entry is free for all activities.

Independent animations are as old as animation art itself. Through them, artists seek to experiment new techniques with low budgets. Advance in animation software technologies, which have lowered the costs and cut down production stages, have been helping independent animation, be it in small studios or even through DIY, to conquer more and more space. This conquest is directly related to how fast you can exchange information, and spread it on the internet.

Independence from big studios and the short film format allow artists to deal with more experimental narratives and innovative techniques. Discovering new artists, new works, and new languages has become an accessible pastime for anyone with an internet connection. However, finding non-virtual spaces to promote these works and the exchange between the artist and the public, as well as finding a place that unites works with diverse techniques and narratives, is still a challenge.

With that in mind, this year’s FILE Anima+ presents 99 short films from innovative and experimental artists who work with different techniques, and approach various subjects, from insomnia to reflections about gender. By doing this, we would like to create a space for discussing these works. Ont of the highlights is “Bang Bang!”.

French animation “Bang Bang!”, from director Julien Bisaro, tells the story of Eda, a young woman who retires, and finds herself in a world where she feels obliged to follow her father’s instructions. With a strong sense of light, camera, layout, and a minimum use of color, Bisaro has created a highly emotive movie which attracts the public and connects with the child that lives inside us all.

In its fifth edition, FILE Anima+ presents, apart from its short film curatorship – which seeks, from its origins, to open a window to animation artists and professionals, teaching institutions, and both small and big studios, encouraging the forming of new publics –, a new exhibit proposal, called “Cutting Edge Animation”, with animations that present, in their themes or techniques, innovations in language and narrative. Formed by an international group of emerging artists, these works reflect experimental concepts which mix different subjects and medias, and in which the term “animation” goes way beyond traditional techniques, evoking surprise, euphoria, horror, and beauty. Artists from this exhibit are part of the collective Aboveground Animation, an itinerant showcase of animations, videos and musical performances, and of artists form all over the world. FILE Anima+ 2015’s “Cutting Edge Animation” curatorship has 21 animations from 13 different artists. The works show diversity, exploring the possibilities of animation to their extreme. Each artist seeks, in their preferred topics, the potentiality of narratives inside their social and artistic contexts.

For the first time, FILE Anima+ offers an award. The FILE Anima+ Award is an animation prize that complements other activities form FILE Anima+, an animation festival that has been showcasing works from all over the world since 2011 with the purpose of spreading animation as an artistic genre.

Ever since its first edition, FILE Anima+ has had a partnership with several animation festivals, which every year present the best in their editions, by selecting awarded works. This year we’ll have Japan Media Arts Festival, Be There! Corfu Animation Festival, SICAF, SIGGRAPH, and ANIMA – Córdoba International Animation Festival.

Be There! Corfu Animation Festival 2014

It was nearly impossible to imagine that digital games would reach so many platforms and so many people, becoming one of the most influential languages of modern life, and one of the biggest entertainment industries on the planet.

As soon as in 1940, the first electronic game was displayed on a machine called Nimatron and, today, in 2015, after seven decades, eight console generations and numberless platforms, we at FILE GAMES RIO 2015, ANIMA+GAMES present games in which the narrative, the design and the art, combined with playability, evince the wealth of this language.

The great novelty in this exhibit is the leisurely and artistic content through equipment that provide full immersion virtual reality. Experiences that relate directly to our physical perceptions, such as looking around, and which are capable of bringing us to wonderful environments; of provoking impressive sensations.

In virtual reality, with 3D devices, action is not necessarily facing you, as we are used to seeing and creating, forever facing a screen. This technology is changing the interactivity of games and promises to change the way we perceive cinema as well.

In this edition of FILE GAMES RIO 2015, we present a few immersive experiences through different equipments. It is your turn to try them!

Free entry for all ages