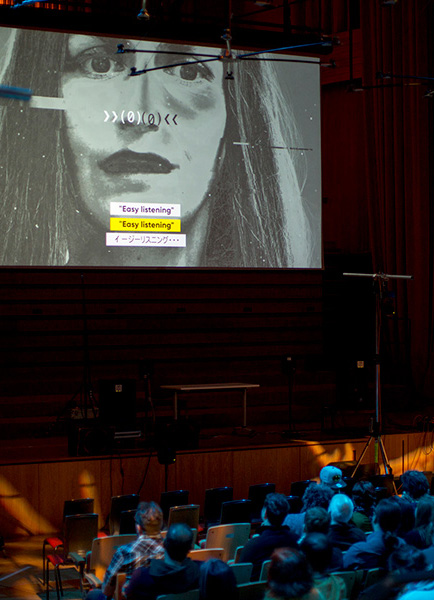 Scrolling to Zero (for organ, electronics and audience)

“It’s the end. Evaporating. Evap… or leaking. Downloading byte by byte. Rendering breath by breath. Listeners. We are organized organs. An organism. We are the sound. Organized sound.”
(E.Thacker, Cosmic Pessimism)

The composition is a collective sound meditation of the word “end”, a sound ritual for organ, electronics, and audience’s voices, led by a digital avatar.

(…) In the post-molecular world, in the era of Anthropocene, which is defined by the threat of nuclear annihilation and political and ecological catastrophe, people as a species have clashed with boundless emptiness. With a lack of objective, with the prospect of annihilation. Scrolling to zero has commenced. The sum of experiences of people who meditate on emptiness in a group is more than emptiness in general. (…) In this experience, the ethical proposal of a new awareness and responsibility for interrelationships is contained. Thus, one should not fear the moment of collapse. The place of each being, of each species, will be taken by another. (…)

Rafal Zapala is a composer, sound artist and improviser. This artist gained a post-doctorate degree in composition and is an associate professor at the Academy of Music in Poznan. His music was presented at contemporary music festivals, jazz clubs, experimental music venues, and open, public spaces. He is also an artist-in-residence at Stanford University – CCRMA, CK „Zamek”, Swiętokrzyska Philharmonic, ZK/U Berlin, Vertigo STARTS and CNMAT UC Berkeley. He is the founder of Kołorking Muzyczny, and an_ARCHE New Music Foundation.