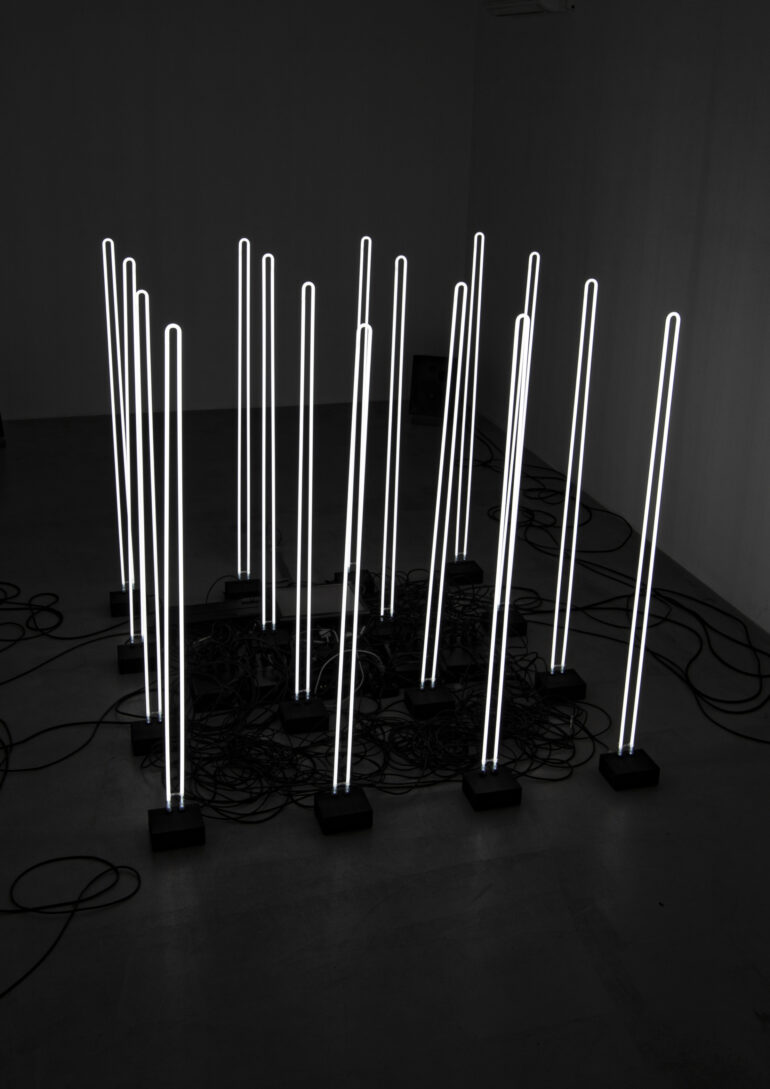 The Mindscapes series, made up of videos, installations, audiovisual performances and algorithmic images, consists of a set of works in which an imaginary landscape from the fields of neuroscience, culture, language and epistemology is explored. #L1 is an installation in which a group of 16 neon bars, and a set of samples by contemporary authors extracted from youtube are edited by a primitive neural network algorithm. The sequence of flashing light and the disjointed speech generated by the algorithm operate a particular state of consciousness, saturating the perceptual apparatus, activating memory and stimulating associative thinking. If somehow the work enunciates a counterpoint between nature and culture, the highlight is the moment when the neon (glass, gas and electricity) cannot respond to the speed of the algorithm, and enters a state of suspension.

Bio:
Fernando Velázquez is an artist, curator and professor. He investigates technical devices as mediating agents of perception, with particular interest in the structures, dynamics and narratives that give rise to prevailing paradigms in emerging and generative creative processes, and in transdisciplinary methodologies. His production includes installations, objects, videos, audiovisual performances and images generated with algorithmic resources, which operate as a support for narratives that stimulate the spectator to an active involvement, sometimes interactive and ritualistic. He holds a Master’s degree in Fashion, Art and Culture (Senac-SP), and a postgraduate degree in Video and On and Off-line Technologies (Mecad / Esdi), and in Contemporary Cultural Management (Itaú Cultural / Singularidades). He received, among others, the Funds for Culture (Uruguay, 2019), the Prêmio Sergio Motta de Arte e Tecnologia (Brazil, 2009), the Prêmio Mídias Locativas Arte.Mov (Brazil, 2008) and the Vida Artificial (Spain, 2008). As a curator, his exhibitions Adrenalina e Periscópio stand out. Between 2015 and 2018 he was curator and artistic director of the Red Bull Station in São Paulo. He is currently a professor of the Contemporary Cultural Management course at Itaú Cultural/Singularidades and at the postgraduate course in Contemporary Art and Expanded Cinema at FAAP/Uol. Since 2020 he has been a member of the GAIA – Grupo de Arte e Inteligência Artificial, incubated at the INOVA-USP laboratory. More information at fernandovelazquez.art.