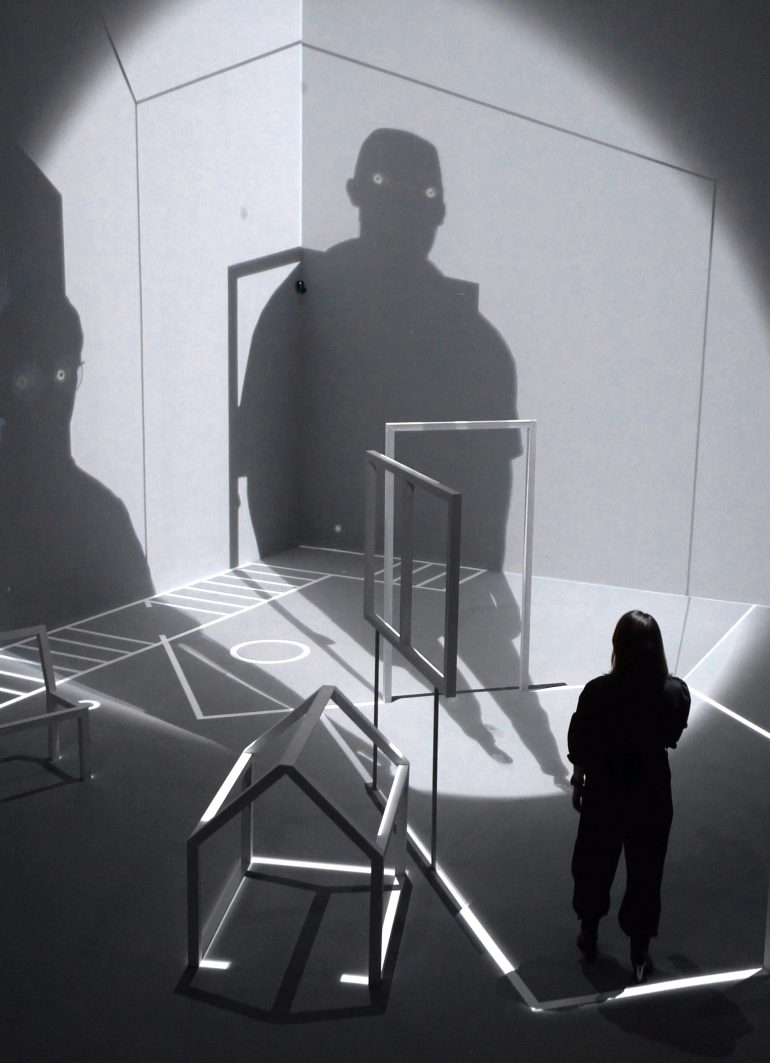 “Augmented Shadow”, devised by Joon Moon, refers to a device and experience that implements augmented reality using shadows. This device enhances reality by superimposing virtual shadows on the actual shadows of objects according to the angle of the lighting device that the audience controls. The artist has tried the unique visual language and interaction rules of “Augmented Shadow” through a series of works.
“Inside” is an immersive art installation that projects shadows on a stage with a floor of 10 X 10 M and walls of 6 M high. The scale of shadows is 1:1 and the audience can enter the shadows, which is the first trial among the series. Objects such as doors, windows, walls, and chairs are on the stage. Their shadows display a virtual scene that connects with the real scene through the doors and windows. The audience participates in a story by lighting and revealing the world that the two scenes are constructing.
This story shows shadow people coming and going between the virtual scene and the real world. The audience meets and interacts with them when they appear in the real world. Their actual bodies are not visible but only can be observed by black shadows. However, their reality, a full colored world, can be observed when the audience looks out the windows from the center of the stage. The audience observes them from the real world, but they also observe the audience from their reality. At the same time, the other members of the audience observe the stage from outside. Thus, the audience finds themselves an active part of the story.
“Inside” creates the fun of observation between overlaid layers of reality. Furthermore, it experiments with how high levels of presence the audience would experience from this shadow world, and where the audience would play this game around the real-virtual boundary.

Joon Moon (Korea, b.1982) is an artist and a computer programmer working in Seoul. His works were exhibited at MOMA (New York), Microwave, Onedotzero, FILE, Cinekid, Scopitone, and major museums of Korea such as National Museum of Modern and Contemporary Art, Seoul Museum of Art, Gwanju Design Biennale, and Kumho Museum. He is mostly working on experimental media and computational art such as augmented reality, tangible interface, generative art, and sound visualization. He is also a university teacher and freelance technical artist.