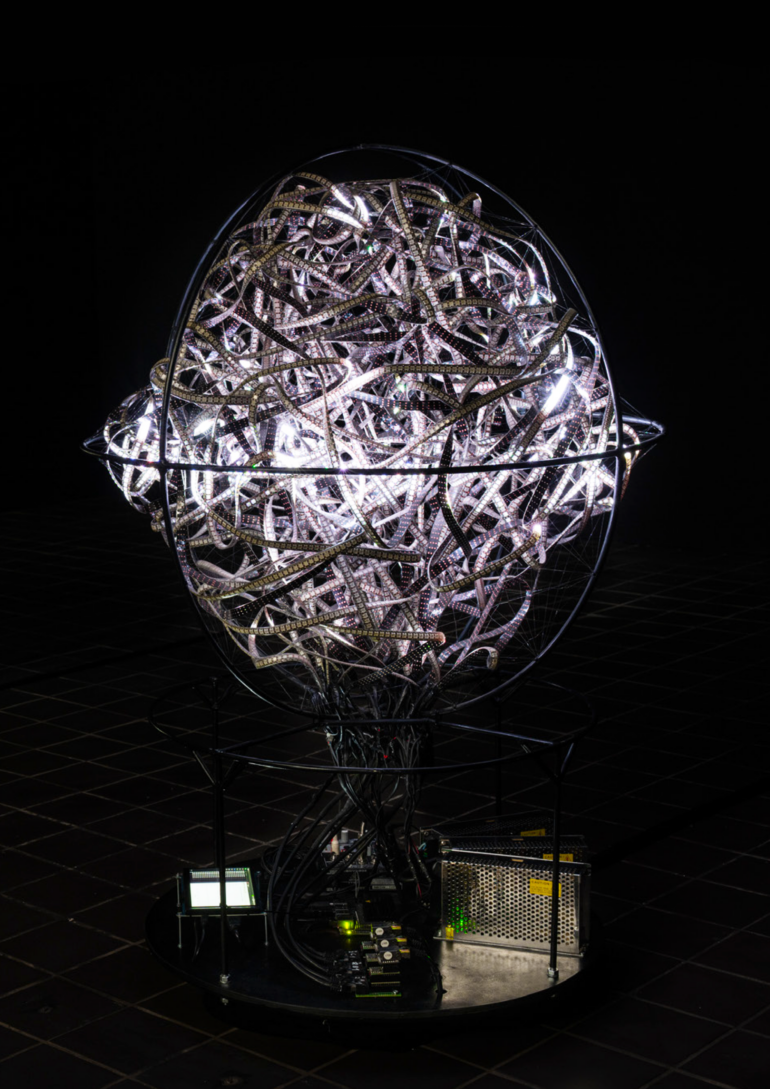 The SpeculativeAI series consists of aesthetic experiments designed to make processes of artificial neural networks perceptible to humans through audiovisual translation. The research started with the work Exp. #1 (associations), that examines inner behavior during the prediction and training process. In the experiment a network is visualized by a light object with the state of each neuron represented by a corresponding LED. During the training process of the neural network, readable patterns and shapes start to emerge that corresponds to certain sounds. The current work – Exp. #2 (conversation) – questions an AI’s capacity for empathy and purpose while communicating with a second AI. With conceptual support from the Center for Artificial Intelligence (University of Oviedo) Birk Schmithüsen set up two independent AI systems that can communicate with each other using an invented language of audiovisual associations. Both systems are embodied by a light or sound object and can receive the messages of the other. In order to have a meaningful conversation, both objects produce an empathic behavior by understanding the received messages and giving an intentional response. The spherical light object with a diameter of 80cm consists of a chaotic heap of 95m LED stripe a microphone and an embedded AI computing device. It can hear sounds and create images. The sound object, in the form of a dodecahedron of black opaque plexiglas with the same diameter, is equipped with eight speakers, a camera and the second AI system. It can see images and play sounds. In the exhibition, the two systems are in an ever-changing audiovisual conversation.

Bio:
Birk Schmithüsen is an audiovisual artist who was born in 1986. He is currently based in Leipzig, Germany. His work was shown internationally at key media art festivals in France Netherlands Spain Austria Germany Serbia and Brazil including re:publica Chaos Communication Congress Ars Electronica Festival and ZKM. Birk Schmithüsen holds a diploma in fine art, was an EMAP 2019 scholarship holder and is an alumni of the Academy for Theatre and Digitality in Dortmund. He cofounded the performance group ArtesMobiles. In his artistic research he explores complex phenomena such as Artificial Intelligence, Big Data and Climate Change as artistic media. The research results are staged in performances or presented in immersive media installations. His approach is to make complex systems experienceable through audiovisual interpretation thus promoting discourse. Between explanatory approaches through data sonification and visualization, abstract aesthetic reuse of emerging technologies and speculative concepts, he creates systems with live-like behaviour and opens up new perspectives on current topics.
Conceptual support by Artificial Intelligence Center University of Oviedo at Gijon. 3D calibration of volumetric display by Felix Bonowski. Coding by Marcus Ding. Realized at LABoral Centro de Arte y Creación Industrial in Spain, within the framework of the European Media Art Platform EMARE program with support of the Creative Europe Culture Program of the European Union. Additional production support by ArtesMobiles.