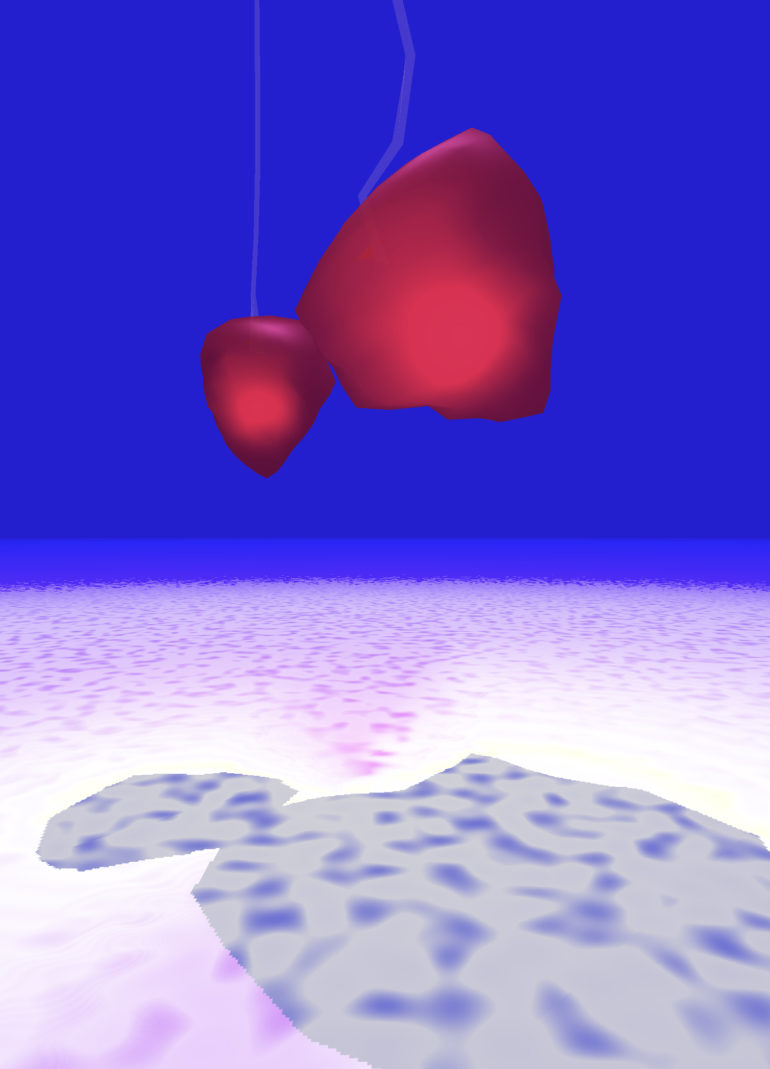 Abstract:
“Touch the Heart” is a Web-based interactive project. It is built around a 3D physics simulation of two “hearts” hanging from “ropes”. People can pull and release each heart, making them oscillate and eventually collide, while “moving” around the scene. The artwork reflects on how our experience changes our perceptions and perspectives on the world. Both visuals and sound are synthesized in real-time according to the simulation. The project is written in JavaScript and GLSL. It uses the three.js library, but leaving most rendering details to custom written shaders in GLSL. For the ropes, a simple fragment shader creates a pulsating effect. For the hearts, a vertex shader creates a distortion, using a simplex noise spatial component, and a time component to simulate heartbeats; a fragment shader renders the refraction of the internal light, which has an intensity synchronized with the heartbeats. For the floor circular waves are created, based on the position of each shadow, which become linked when the shadows approach each other. When hearts collide, explosion-like waves expand along the floor. The whole rendering varies along time, in a day-and-night cycle. Sound synthesis, using the Gibberish library, creates sounds for the heartbeats, for the collisions, and a background sound. The heartbeat rate depends on the heart speed and all sounds depend on spatial location.

Biography:
Gisela Nunes is a media artist from Portugal, with a background in design and multimedia art studies, now focused on interactive media art. Her practice explores the object, the device and audience participation to present interactive live experiences. While project themes may be various, real time processing, augmented reality and synthesized sound and images make up the backdrop to her work. In recent years she exhibited at venues as Art & Science 2016 European Digital Art and Science Network (Serbia), Ars Electronica Festival 2015 (Austria), Yicca 2014 Winners Exhibition (Switzerland) and 2012 Guimarães European Capital of Culture (Portugal). Her intention as an artist is to wake up the curator that lives inside ourselves.

Paulo Almeida is an Assistant Professor at the University of Minho, and a researcher at HASLab / INESC TEC. He obtained a PhD degree in Computer Science from Imperial College London in 1998. He researches in the area of distributed systems, namely in causality tracking mechanisms, eventually consistent non-relational databases, fault-tolerant distributed aggregation algorithms, bloom filters, and distributed algorithms in graphs. In recent years the main focus of research has been on replicated data types. A long time ago he devoted to computer graphics, namely image synthesis, and in the last few years he has been interested in digital art.