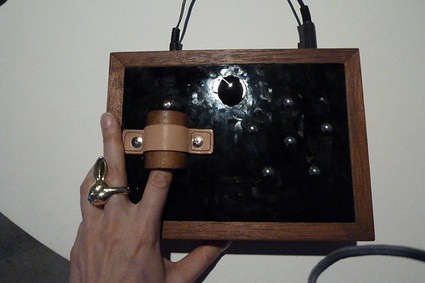 Abstract:
Making a beat from the heart rate, body resistance manipulates the sound. Heart ‘n’ Beat analog synth derives control input from the heart rate detected by an optical sensor. This analog synth contraption is simplistic in musical beat creation. Musical rhythm affects heartbeat and blood pressure, changes emotions and stress. This installation is performed by up to three people. Three punches make sympathetic music, or create a cacophony. Biological Resistance and capacitor will control the character of the sound by touching metal contacts. Low heart rate plays slow tempo sound, high beat changes the drum tempo. Configuration of the rhythm from the heart rate, to determine the structure of the sound by the body, is one of the oldest methods of composition, and is also Klangkomposition (sound mass). From the perspective of folklore, the history of music is very much related to the heartbeat. Drum rhythms from many ancient religions put people into altered states of consciousness by synchronizing with the beat. This idea has been used in contemporary music consciously or unconsciously, such as trance music, drum and bass. From a technical perspective, the human body acts as resistance and capacitor. Using the human body as part of an electronic circuit for manipulating the synthesizer is a popular technique.

Biography:
Yoshi Akai is a sound artist, performer and instrument designer. He produces original analog-electronic musical instruments with a unique input system, and does performances with those creative gadgets. Those instruments render sound from the existing object with the same action. He had numerous exhibitions and performances in Asia and Europe.