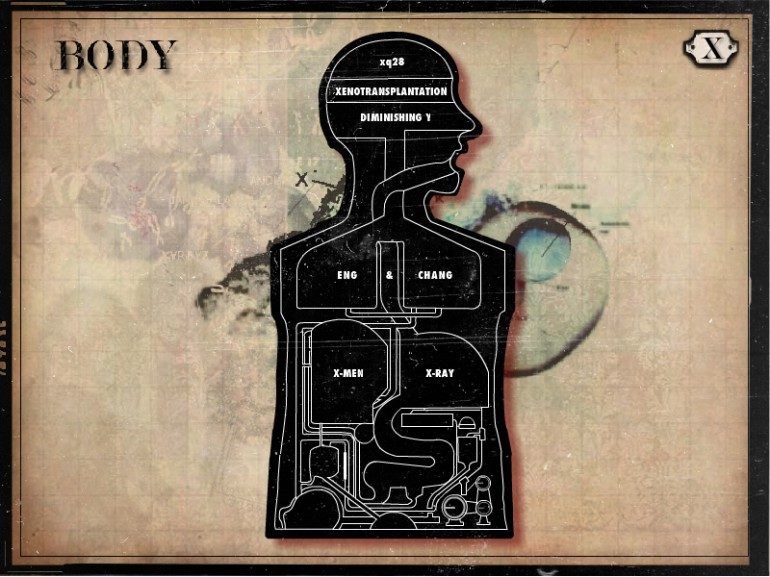 Abstract:
This encyclopedic interactive website revolves around the letter X and it’s multiple meanings in Western culture. The work is the result of a four-year collaboration between Canadian artists Marina Roy and David Clark along with the composer Graham Meisner. This piece is a digital extension of Marina Roy’s book: “Sign after the X______” who wrote the script for the piece. The music is by Graham Meisner and the animation and images are by David Clark. This work examines how the letter X became part of Western languages and how it has been used as a cipher for otherness and the unknown. As a survey of meanings and histories, it looks at how the letter X has influenced the realms of law, psychoanalysis, medicine, technology, geography, and linguistics. The letter X is one of the most simple of graphic gestures and yet it has a complex history and mysterious presence in our language. The letter X censors, alludes to, stands in for, is a substitute for. This piece allows the viewer to browse through the associations and dense theoretical ideas that have become attached to this letter. The piece consists of many interactive animated collages with voiceovers and music creating a rich and strange interactive experience for the viewer.

Biography:
David Clark is a media artist living in Halifax, Canada interested in experimental narrative form and the cinematic use of the internet. He has produced work for the internet, narrative films, and gallery installations. He produced the interactive narrative works: ’88 Constellations for Wittgenstein’, ‘Meanwhile’ and ‘A is for Apple’ (that won the top prize at FILE2002). Marina Roy is an artist living in Vancouver, Canada who makes images, objects, and animations. She collaborates on performances and videos and has a writing practice in the form of essays and book publications. Grahan Meisner is a composer.