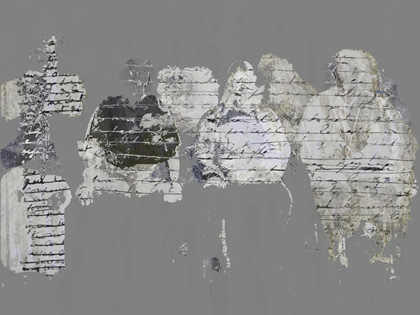 Abstract:
“S-ICI/is it here?” is an interactive multimedia installation that explores the theme of transindividuation, i.e., identity through interaction and representation. At first, it looks like a video projection: a blank screen, few seats and, surprisingly, a tripod with a video camera directed to the audience. When people are seated, the mirror image of the empty room fades in. After a while, the spectator begins to realize that his own image is revealed when he moves, but vanishes when he is still. Spectators start moving, playing with each others’ representations. Other still images and films are then progressively introduced, in an attempt to shift from awareness of bodies to consciousness of presences. The process, at first narcissistic, becomes progressively poetic and visual. Each spectator becomes the actor of a collective abstract image, other, as an extension of bodies, themselves extension of thoughts. This image yet remains fragile and ephemeral. Is it possible that it is us? “is it here?” is also a process, following a scenario, a poetical, rather than a narrative essence. Each spectator makes part of the process as if he was in the film. The scenario includes intertitles, that act as enigmatic clues, indicating that this might not be a game. There is no sound continuum, but at the end a light bulb bursts: the machine stops. The image is gone. Is it here? Total duration is 16 mn. All intertitles are available in English and French.

Biography:
I graduated in Engineering and Architecture and then committed professionally in a visual research. Dedicated to the poetry of intricacy, namely life inside urban and non-urban environments, I use various media: landscape installation, interactive video, generative video. My aim is to open possibilities, letting the spectator drift with the work of art into a broader notion of representation, which would not lie on the medium anymore: ideally achieving consciousness through emotion.