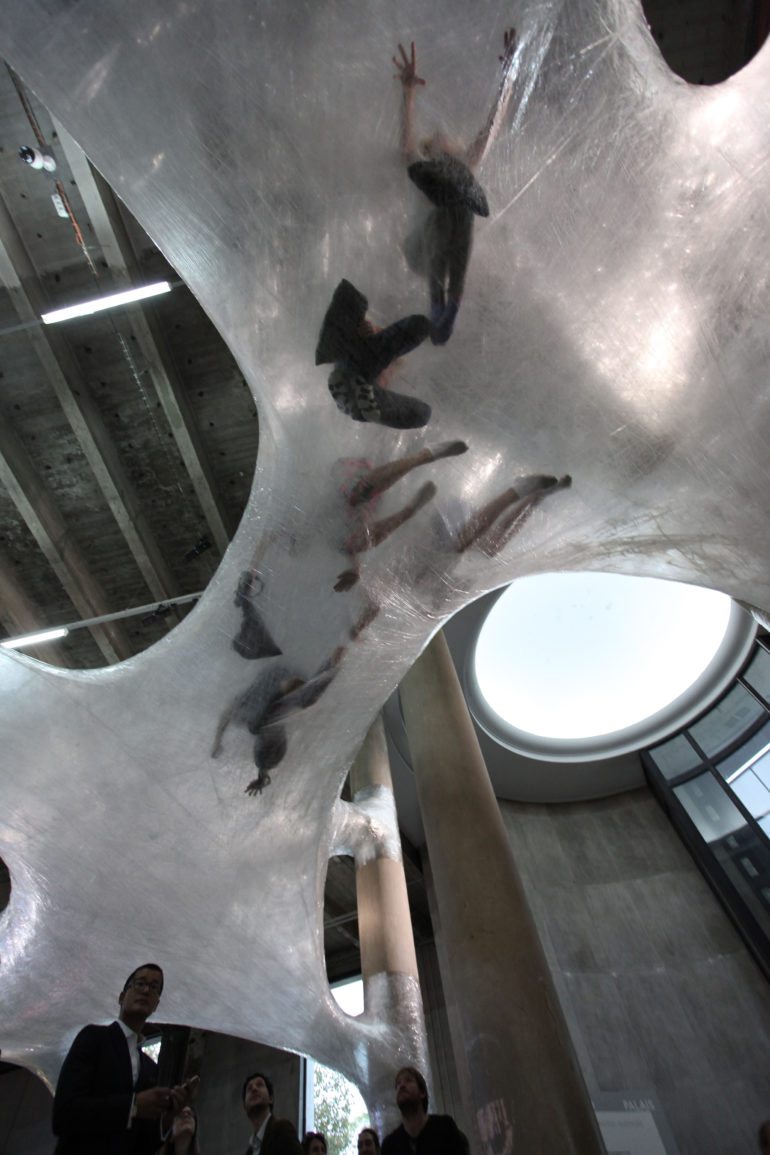 Abstract:
Constant wrapping of pillars with a transparent adhesive tape results in a complex, amorphous surface through the process reminiscent of growing of organic forms. One line evolves into surface that forms an organic shape of extraordinary strength. The entrance of the audience inside the volume transforms the sculpture into architecture. It was practically “found” through the act of chaotic wrapping, where a one-dimensional line (“tape”) slowly turned into two-dimensional plane, which then finally curved into volume.

The installation was envisaged as a site specific, parasitical structure invading an arbitrary location. The straight lines of main trajectories are stretched across a given area and these tendons are then wrapped diagonally with layers of elastic tape, giving shape to a complex organic form through a process similar to the emergence of such structures in nature.

The idea originates in a set design concept for a dance performance in which the form evolves from the movement of the dancers between the pillars. The dancers are stretching the tape while they move so the resulting shape is a (tape) recording of the choreography.

Biography:
Numen/For Use is a collective working in the fields of conceptual art, scenography, industrial and spatial design.
The group first formed in 1998 as a collaborative effort of industrial designers Sven Jonke, Christoph Katzler and Nikola Radeljkovi? under the banner For Use.
In 1999 they establish Numen as a collective identity covering all projects actualized outside the sphere of industrial design.
Since 2008 the collective turns its focus towards configuring objects and concepts without a predefined function, an activity resulting in the more hybrid and experimental works such as the N-Light series and Tape Installation.
Parallel to these publicly exposed ventures, the group wins several international awards for their accomplishments in the field of industrial and set design.