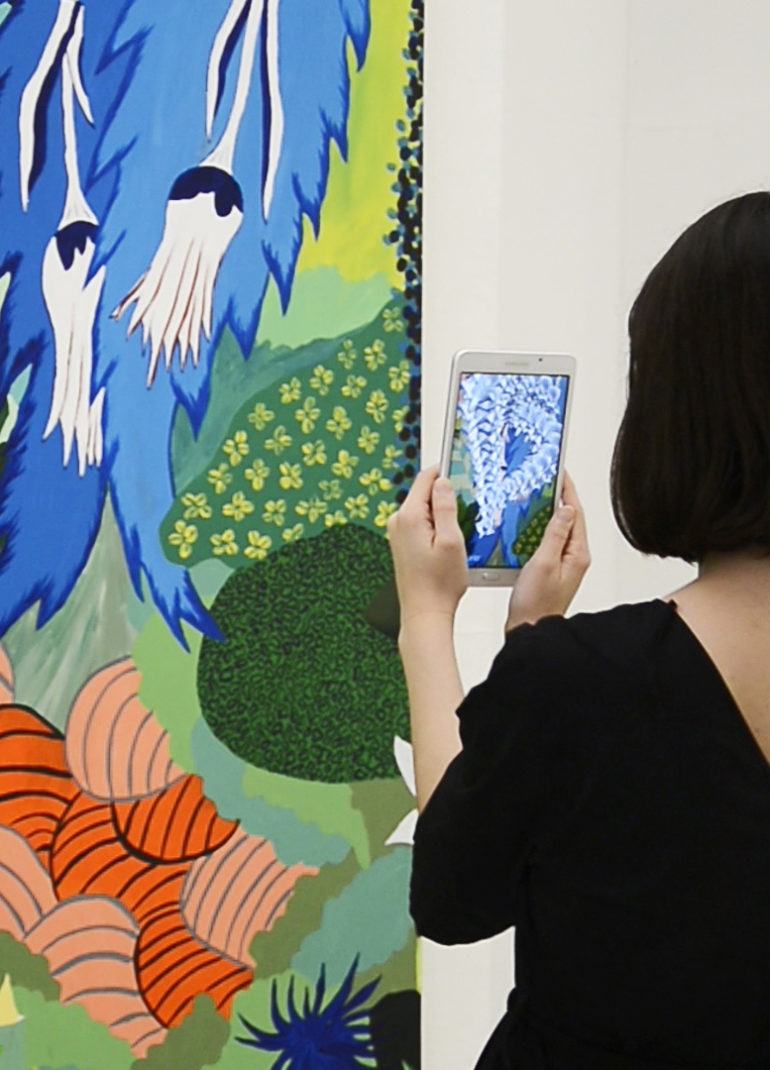 Abstract:
“After Eden” is an interactive installation using augmented reality on acrylic paintings, aiming to blur the boundaries of digital and classic forms of artistic expressions. Luxurious gardens bloom and flourish on Iseult Perrault’s artwork, and augmented reality is just a little step further allowing them to come to life. Playful shapes, creatures and sounds are hidden between the plants, secretly waiting for the spectator to find them. Whilst the vegetation seems dense and impenetrable at first sight, each visitor is invited to take a journey into this vivid jungle through augmented reality, a tool that allows new levels of reality and understanding.
“After Eden” illustrates the utopia of a new and playful form of visual paradise; a luxuriant space which contains both surprise and danger.
By merging the virtual and the real, it brings two very different mediums together and underlines the timelessness of painting. With no surprise, it was inspired by the (un)idyllic representations of Eden in classical art history (‘Le Jardin des Délices’ of Jérome Bosh or ‘Les Portes de l’Enfer’ of Rodin for exemple). In a way, it echoes back to the 16th century theories about vision, mathematics and perspective which rule our daily realities brought to life by new technologies.

Biography:
The three artists met in Lausanne during their studies at the prestigious swiss art school Ecal. They seized the opportunity of working together during a workshop with the designer Andreas Gysin. The two digital artists got inspired by Iseult’s series of paintings and her specific approach of including the spectator in her fantasmagoric world. They still work together in Paris, where they live.

Mélanie Courtinat is a Paris-based media interaction designer. She graduated from ECAL and co-founded the studio PastorPlaczek in 2017. Her work and research focuses on new media like virtual reality and video games, questioning the medium itself and prototyping its future.

Iseult Perrault (born 1993) works and lives in Paris, France. She produces visual narratives by collecting the images online and in real life, and mixing realities. Although relying on the collective imaginary, the topics researched resonate with her encounters whether real or digital.The process leads her to produce compositions embedded with their own stories: fictional exhibition spaces, volumes whose perspectives seem to collapse, green walls, fish walking on its head…

Freelance Interaction designer and digital artist, Salomé Chatriot graduated from Ecal in Media & Interaction Design. Her practice oscillates between building physical installations and creating virtual environments that are taking shape in 3D photography, video, augmented or virtual reality. She exhibited her work from Paris to San Francisco passing by London, Lausanne and Milan and contributed for several magazine publications.